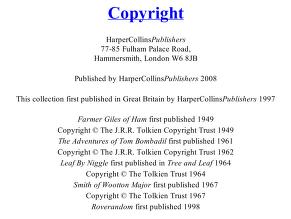 Er...actually, no. I'm just trying to figure out what to do with this.

Tales from the Perilous Realm is a compilation of 'Leaf by Niggle', 'Farmer Giles of Ham', The Adventures of Tom Bombadil (a collection of poetry), and 'Smith of Wootton Major'. Only one of which relates directly to Middle-earth. As far as I can tell it does not include 'On Fairy-Stories', which is somewhat odd, as that essay is typically published with 'Leaf by Niggle' as Tree and Leaf. It relates to The Tolkien Reader, a similar (but slightly different) compilation. I think it may be the UK version (although containng slightly different texts)—at least, I've only ever seen it at a bookstore in Canada.

Does anyone (perhaps someone who owns the book) know the actual publication status of Tales from the Perilous Realm and The Tolkien Reader? (The latter, according to my copy, was published in 1966 but has recently been reprinted in the U.S. I've never seen Perilous Realm—which seems to have been published more recently—except in Canada.) I suppose the fact that someone requested the article means that this is useful information to have. Also, I don't have 'Smith of Wootton Major' (it isn't in Reader) so if someone else wants to offer a short phrase describing it... -Aranel ('Sarah') 03:34, 29 August 2005 (UTC)

This article was automatically assessed because at least one WikiProject had rated the article as stub, and the rating on other projects was brought up to Stub class. BetacommandBot 13:47, 9 November 2007 (UTC)

I have not seen the hardback edition of 1997, but I do have a paperback edition from 1998 (published by HarperCollins), and it differs significantly from the description of the 'first edition' given in the article. It does not include Roverandom (which was not published until 1998), and has no illustrations at all -- not by Baynes, not by Lee. The cover illustration is by Sarah Gibb, not by Lee and certainly not the one shown here as the cover of the first edition. The bibliographic information on the back of the title page does not say in so many words that the content is the same as the hardback edition of the previous year, but that is clearly implied. Can anyone verify whether the information we currently give in the article for the first hardback edition is in fact correct? -- Elphion (talk) 21:43, 27 January 2013 (UTC) 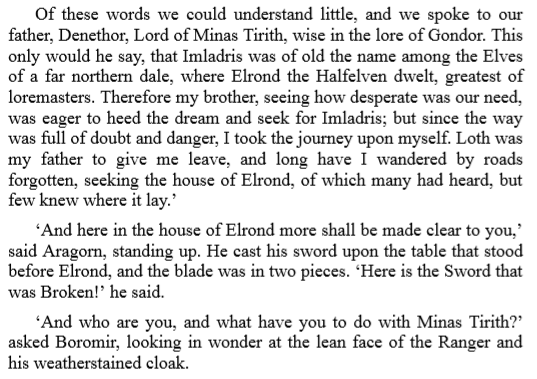 Michael Hordern stars as J.R.R. Tolkien, author of The Hobbit and The Lord of the Rings, in four BBC Radio full-cast dramatisations. Tolkien's tales of myth, mystery and rumbustious exploits have been specially adapted for radio by Brian Sibley, one of the dramatists of the highly acclaimed BBC radio production of The Lord of the Rings. In 'Farmer Giles of Ham', having accidentally shot a giant, Farmer Giles finds his brave reputation being tested by Chrysophylax the dragon. In 'Smith of Wootton Major', when young Smith eats a piece of cake containing a silver star, he is granted access to the magical land of Faerie. In 'Leaf by Niggle', a thought-provoking allegory on the theme of creativity, the painter Niggle embarks on a fateful search for perfection. In 'The Adventures of Tom Bombadil', join Tom and the Hobbits in scenes from The Lord of the Rings which were not included in the BBC Radio 4 dramatisation.